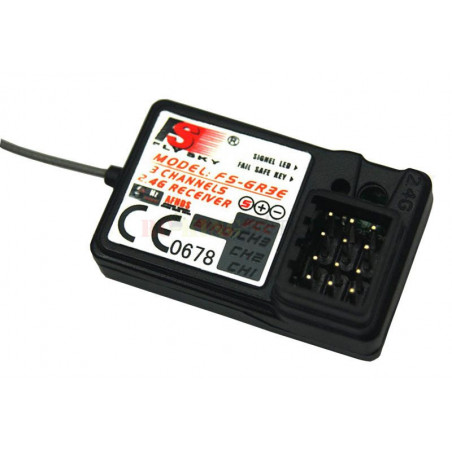 This is another bullet proof receiver from FlySky sporting their flawless 2.4Ghz AFHDS protocol.  The receiver is compatible with the HSP 2.4ghz Transmitter as well as the FlySky GT2, GT2B, GT3B, GT3C and iT4 transmitters as well as a bunch of others.  Please review the table below to confirm compatibility.

As with all FlySky receivers, you can bind the receiver to the transmitter and forget as the FlySky radio equipment does NOT suffer from unbinding like other brands.  Buy FlySky and control with confidence.


A bit of a personal blurb on how I feel about my FlySky radio equipment.

About 4 years ago I started having signal issues with my JR 9x2. I had a near miss with an FPV flying wing, lost 2 planes, 1 drone and finally a helicopter to signal loss before I was willing to admit there was something up with my trusty 9x2. Not the radio's fault, but rather the Spektrum module as switching back to the 35mhz module proved bullet proof. As many hobbyists would agree, this was one of JRs most successful, bullet proof radios of all time making it extremely popular with the RC community.

I could have simply replaced the radio module, but decided I wanted an upgrade with telemetry and a nice colour touch screen, but the JR/Spektrum, Hitec and Futaba Radio's were simply out of my price league and I was not a fan of the direction JR had taken with their new design, look and feel, so I took the chance and replaced my trusty JR 9x2 with the FlySky i-10 radio at a 1/3 of the cost of the other big brand radios with similar specs. The other advantage was being able to swap receivers in my models affordably as the 6ch and 10ch receivers cost a 1/4 of the big brand receivers and of course I had approx. 30 models that needed kitting out over time... of which I have probably at this point swapped over 90% of all my models.

So now I personally make use of FlySky radio equipment in my own 90 size Heli's, 20cc planes, drones and everything else in between and have yet to experience a brownout, physical failure or loss of signal in the last 3-4 years I have used it and enjoy the signal feedback, battery voltage (Receiver or Flight pack), temp and RPM sensors. I stand by FlySky because of their reliability first, and bang for buck second.